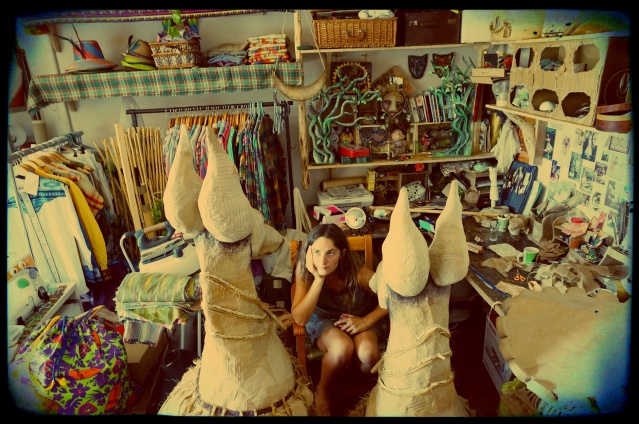 This is the week I become an almost-commercial podenco builder.

First, they asked me if I would sell them my two podenco puppets – based on the Ibizan hunting hound brought with the Phoenicians from Ancient Egypt, several thousand years ago. The proposition was disturbing – or maybe, what really disturbed me was how an almighty institution like that could make me feel, simply by suggesting that I give to them what is dear and precious to me for personal, creative and financial reasons. So then we thought of a better plan – that I would make them two brand new podencos of their very own. But based on the available budget, I would need to make these two podencos in five days, and the original ones took about three weeks…

I´ve wrapped him in plastic and sellotape. And though it´s only monday morning of this strangest of strange weeks, I have already begun to converse with the podencos. I have told them that, this week, they have to do an unheard of thing – something I can barely believe I am asking them to do. They have to sacrifice themselves, offer themselves up, in order to give birth to a new set of podencos. We have discussed this at length. I have listened to their concerns, answered their questions. In principle, only one of them needs to be sacrificed, so it takes a while to reach the delicate decision of which podenco will be the one. The appointed dog has stepped forward, been covered with plastic and a liberal sponging of olive oil, and now he´s being mummified with plaster of paris bandages…a strangely apt ritual echoing those of his fatherland, Ancient Egypt.

But it will soon go disastrously wrong, and the first big lesson will be delivered. After three hours I realise that that embracing a new, unfamiliar medium last minute, as a supposedly quicker, more durable and convenient solution to my familiar cardboard, has been a mistake. I am left with two, irregular-shaped plaster halves of a podenco head which do not fit together, a studio covered in white powder, and a beloved podenco puppet covered in ripped plastic, white plaster stains, and a scalpel cut running down the front and back of its body. I have almost lost an entire working day to this failed mummification experiment, and I have also nearly lost one of my most prized puppets. My first day´s attempt at being a commercially successful artist has not been successful.

Lesson two: only under real pressure do you discover what you are capable of, what you know best, and how to make sound decisions. With one fifth of my making days lost already, I´ve cleaned the white plaster grime out of my studio and I am starting afresh with cardboard. Today, some kind of epiphany takes place. I feel strangely calm as I re-wrap the podenco in a fresh coating of plastic and sellotape, cook cornflour paste and soak my first batch of cardboard scraps. I am seriously behind schedule, but I feel almost drugged by the bliss of returning to the medium that I know and love… it has ease and familiarity. The cornflour paste is still warm, I am somehow soothed by the earthy brown and beige tones of the cardboard as I squeeze water out of my ripped cardboard pieces. This, the world of cardboard-mache, is the world I belong in, and it was ridiculous to think of trying to jump into another one.

This morning, time is of the absolute essence, but something magical is happening – I´m in ‎Mihaly Csikszentmihalyi´s  flow state. The pressure´s on, but I feel I´m where I need to be, and doing the thing that I do best. Never before have I been so aware of the fact that I am being paid a quite decent wage, right now, to do all of the things which used to be a weird craft obsession – ripping, cutting, gluing and pasting cardboard in a particular way, based on having done it many times, each time learning new, better ways to do it. It begins to dawn on me that perhaps this niche cardboard skill of mine is useful, valuable – that it might even earn me a living.

In a couple of hours I have literally created my first new podenco. That felt too easy. He bakes in the midday sun outside the studio, and then I cut down the front, separate the two sides, and release my old, plastic covered podenco from within. It´s a weird moment. I feel like a midwife engaged in an ancient Egyptian birthing rite. When the cellophane-wrapped podenco beneath is liberated once more, I hug it.

The first new, post-podenco is sculpted into life by the end of the day. And I must admit, this is when one of several perplexing questions of the week arises… If it is actually so very easy to reproduce my creations on demand, for the super-rich Ibiza clubbing industry, does that mean that my original creations have less value…?

We are most certainly in the flow. It´s all a happy blur of Radio 4, Michael Meade podcasts and coffee. I seem to now have four podencos, and it´s still only wednesday. How has this happened? The new ones are smooth and beautiful – slightly bigger than the original ones, they seem a different breed. More meaty, stocky. Older, wiser. 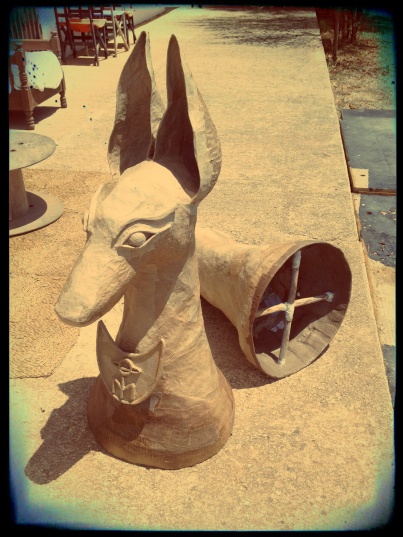 I´m giving them their own breastplate, with the Woomoon symbol, as requested, the shape of a crescent moon. And as I make these creatures my ideas about them are changing. Previously, it had felt really important to make sure that they were different from my own podencos – painted differently from my usual style, different colours – black and gold and orange? These will be the ´commercial´ podencos, I thought. I don´t want anyone to confuse them with the old,´authentic´ ones…

But now I´m realising that I cannot make two new podencos, or in fact anything, without them being some kind of authentic expression of me. Regardless of constraints of time or money, I can´t just make a ´commercial´thing. Yes, they are a very different breed, these new hounds. Their creation, their reason for being here is completely different to that of the originals….and yet they have unwittingly become two more creations that have meaning to me, whether I like it or not. They have been made solely for commercial reasons – their price and value was negotiated and fixed before they came into being – and yet they´ve still become…meaningful creatures. They might be the commercial podencos, but they have their own story – just a different story.

They are getting different eyes, these new, fancy podencos. I would like them to be more Egyptian, and for their original brother and sister podencos to remain the more earthy, Eivissan countryside descendants – less Anubis, more island hunting hound. These new ones are feisty, a bit intimidating, a bit sexy. Clubland will just love them. 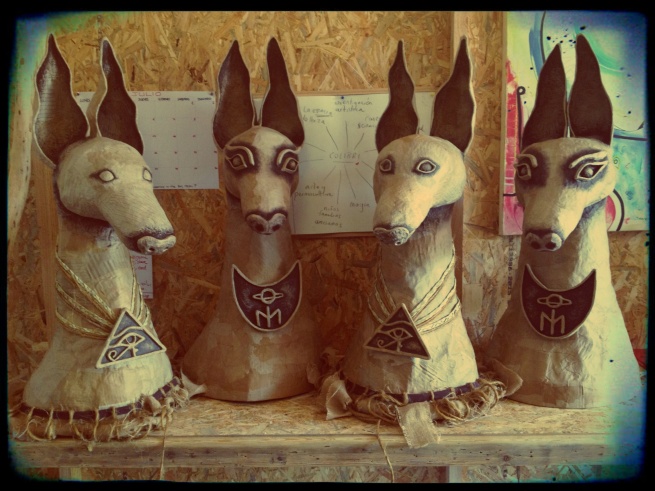 When I´m looking at my family of four podencos, I like to mix them up. They seem different variations of the same family. In a few days time, two of them will stay in the countryside of Balafia, San Lorenzo, whilst the other two will descend to the South, and have special boxes made for them – they will either be in their special protective boxes, or performing – parading through the throngs of fashionable people, to the sounds of house, tribal and techno music. But these two different variations still come from the same place, and are of the same family. It amazes me that these two breeds sit well together. It amazes me that even in the commercial domain, things can feel special, meaningful, even a little magical. It is possible. It amazes me that during the course of one week doing a supposedly calculated, ´commercial´ job, things can unfold which are unexpected, and which simply could not have been controlled or predicted. I suddenly realise that is what makes art meaningful, and magical.

I´ve headed South. I´ve put a special frock on. I am thirsty, because I wanted to buy a drink but I discovered they cost 12 Euros. But apart from that, I am happy to be here and absorb the typically Ibizan atmosphere – the distant pine-forested hills are soaked in gold, the music is tribal, hippies and shamans mix with millionaires and botoxed Instagram celebrities. A bundle of nonsensical contradictions which somehow gel together…nothing new there. Welcome to Ibiza.

A backstage door opens, and a pair of tall podenco ears emerge, then another pair. Far away, across the crowd, a parade has begun, weaving between the people. I can see my podencos approaching me – but already something has changed. On the journey South they slipped from me and became someone or something else´s – not mine. I´m glad to let them go. I am not attached to them. I think I have already lost interest in them.

Days later, the exhaustion has eased, and I´m doing an important thing. I mix a new batch of cornflour paste, soak some cardboard, and start the careful task of mending  my podencos – sealing over the scalpel blade cuts and wounds which were inflicted for the sake of birthing their new Egyptian, clubland ancestors. I use papier-mache to bandage over the cut marks. The new cardboard patches are a slightly different colour, so the two dogs will now have a paler strip running down the middle of their faces. And I give the hounds a gift I had promised them, a reward for all that they went through. A new element of folkloric decoration – braided palm-leaf belts, with a repeat pattern of string semi-circles above. It was important to do this, as a demonstration of what value really is, to me, even in the commercial world. Time. Attention. Love. Devotion. Craft.

And now things are much as they were before. I don´t think I have become commercially successful. It´s still a baffling subject to me. I still have two podenco puppets, and I´m very attached to them – more so than before. These days they are more decorated, and they also have an odd, pale streak down the centre of their faces. It´s a long story.

Perhaps there comes a point in your life when you stop looking for the Holy Grail, and realise you can just build it yourself.
Ode to my right hand, to my non-dominant hand, until now I placed so little value on you as I went about my days...
Ladies and gentleman, this is a brief announcement to inform you that I have joined @patreon, and you can now join me there too, for what I think will turn out to be a rather wonderful adventure.....
Getting out some old objects and adding to them....
Hope you're all ok.
So far,

Support me on Patreon